Now that the year is coming to an end, it is time to take stock, reflect, and plan for the next year. Last January I made a list of things I wanted to do this year, and I managed to do all of them but one…

Here are a few things I did manage…

The main reason why I have kept putting this off is the problem of what to eat them with, since a Sunday roast doesn’t feature in a veggie diet…

And IS there a difference between popovers and Yorkshire pudding batter? According to Wikipedia the popover is the American version of the Yorkshire pudding, so I suppose the batter is the same, but the shape is different. Nowadays British Yorkshire puddings look very similar to popovers, but originally they were baked in a large pan and so were not quite so puffy.

I finally decided on plain, traditional mini puddings, and we had them with a creamy mushroom and potato bake.

Whisk eggs and milk. Sift in flour and salt and whisk until smooth. Leave to stand for about 30 minutes.

Preheat oven to 220°C. Put 2 metal muffin pans (12 cups) in oven to preheat for 10 minutes. Then put 1 tsp oil in each muffin cup. Return pans to oven until oil is very hot (important!) and then spoon 2 generous tbsps batter over the hot oil in each muffin cup. Bake until puddings are golden and puffy, about 12 minutes, and don’t open the oven door in between or they’ll sink! 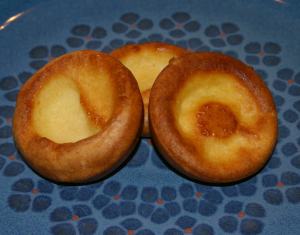 They were very good for a first attempt!

Nice texture – soft and fluffy inside and crispy outside. Even though they had sunk as soon as I took them out of the oven!

I might add some herbs to the batter next time, but plain ones go with everything. I could even imagine rolling them in cinnamon sugar… or perhaps vanilla sugar? Hmmm, there’s a thought… 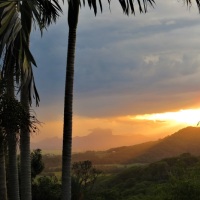 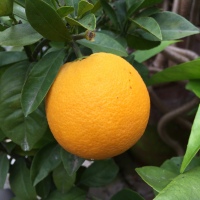