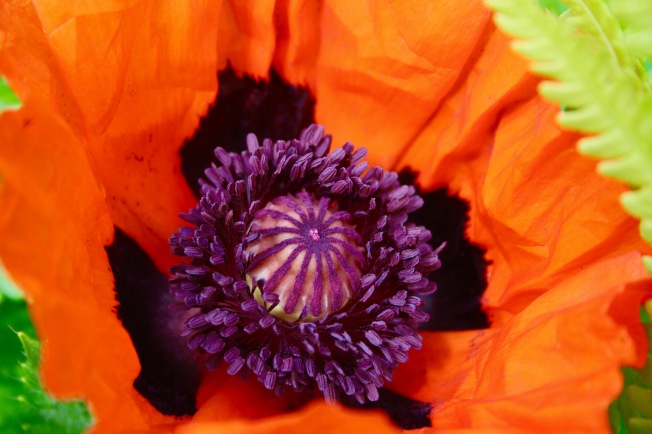 After saving the first poppy to open from a downpour a couple of weeks ago it was put in a vase and I was pleased to see it lasted several days. So now that the poppies are at their peak I decided to make them the focus of this week’s vase for Cathy’s meme at Rambling in the Garden.

As you can see in the picture below the ferns really accentuate their colour in the rockery, which gave me the idea to combine them in a vase.

… which is another plant with lime green foliage, and it looks particularly pretty just before the flowers open too.

I am so glad I cut these on Sunday, as Sunday evening we had a big thunderstorm with absolutely torrential rain and they are now looking rather bedraggled…

These poppies all came from one packet of seeds, sown out many years ago (I just looked it up – 2006!) in a container in early summer and planted out in the following autumn. From just a few plants I now have quite a display, so if you are hesitating in trying out Papaver orientale I can only sing their praise and have never had any problems, except for them getting too vigorous at times and seeding themselves out in the wrong place!

Thanks to Cathy for hosting, and have a good week!

Mondays are often busy, but today I had time to wander around the garden and choose some flowers for a vase, so that I could join Cathy at Rambling in the Garden with her lovely meme again.

However, when I have a fixed idea of what I want to create, it never turns out as I planned, so I ended up with two vases today, and both of them are simply “lovely”. Hence the title!

The first one features my lovely deep red peony. This is always the second to flower and doesn’t get quite as tall as the later ones, standing up well to rain or wind. With purpley-blue Aquilegias and a single blue Centaurea it  looks absolutely lovely.

(Note the poppies flowering in the background… the one I used in my vase last week lasted a good 3-4 days.)

A match made in heaven… 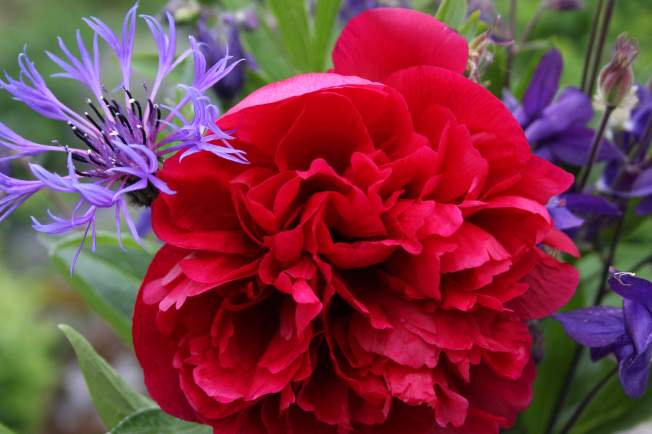 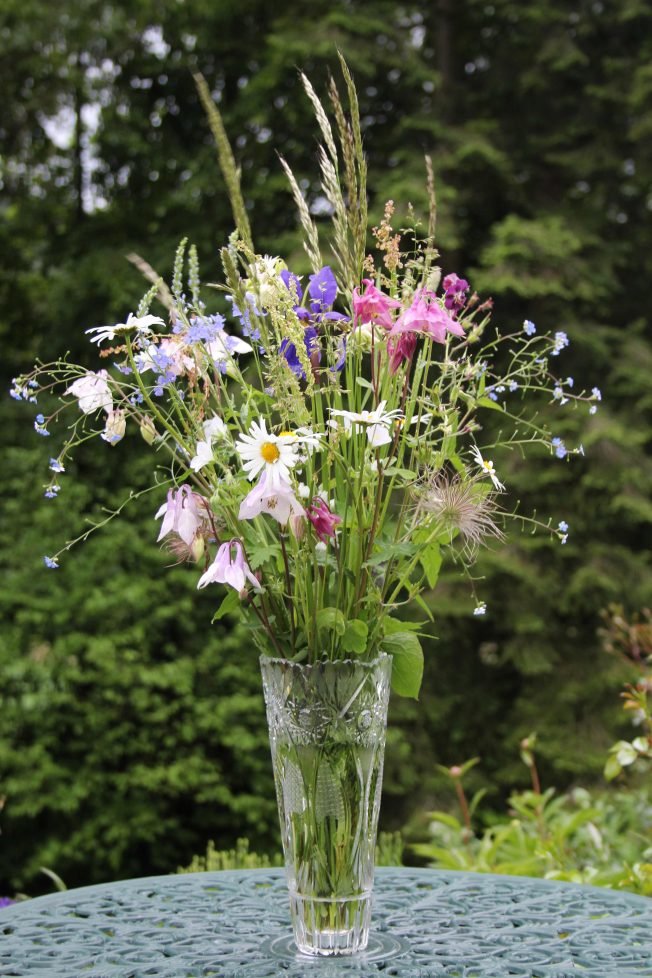 I added one of the Siberian irises, just opening, and some deep purple and some white Geranium phaeum, which has proved to last extremely well as a cut flower.

Some blue Veronica and Omphalodes verna, and a couple of Pulsatilla seed heads completed the airy effect. The white Aquilegia below is, I think, called Green Apples. 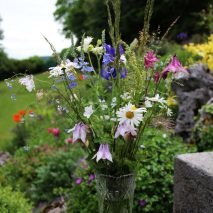 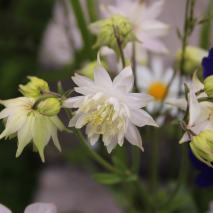 On a grey day there is nothing better than bringing the garden indoors. Do take a look at Cathy’s creation this week, and all the others who have linked in with floral loveliness.

P.S. Thanks to my lovely commenters last week my mystery plant was identified as a type of Celosia.

The rigid petals are quite fascinating!

This Monday I am joining Cathy at Rambling in the Garden again with a vase. Correction, several vases…

(It is raining steadily again, after several days of very cold and wet weather, so these were snipped to savour them before they get totally drenched.)

This is Poppy at the centre of the stage – a real show-stopper and the leading lady, although she does tend to clash a bit. (That doesn’t seem to bother her!)

Then Paeonia (known as Pea to her friends) is looking rather sparkly in her frilly pink dress complete with diamond-like raindrops. 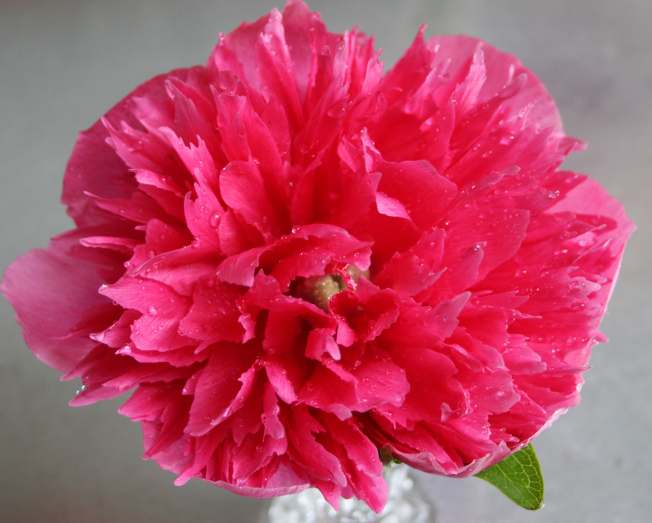 The shy one is Iris, long-legged and willowy and a bit classier than the other girls. 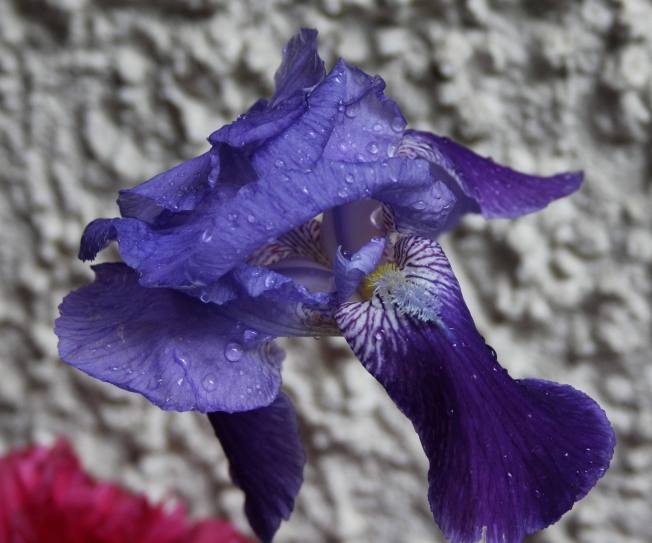 And finally Tulipa Estella Rijnveld (the other girls just call her Stella but she doesn’t like her name being shortened) is a bit past her prime, but still going strong. Just look at those petticoats!

Do you have any stars putting on a show in your garden this week? Do share!

Before I leave you today, I have a mystery plant… this was given to me yesterday by some neighbours. They also have no idea what it is…

Any assistance would be appreciated, as I should like to find out what kind of care it needs.

I am joining Cathy at Rambling in the Garden again this Monday for her weekly meme where we gather things from our gardens for a vase to bring indoors. 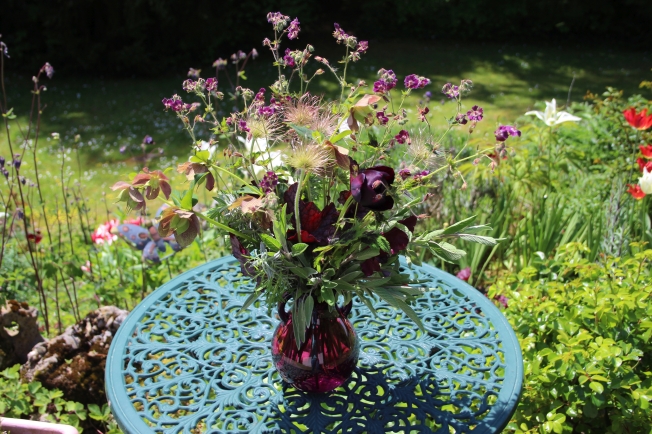 As spring progresses towards summer (or so it seems at the moment with our gorgeous sunshine) the tulips are gradually stripping out in the warmth, shedding their petals rather elegantly, as tulips tend to do. But one remained fully clothed for today, albeit one I don’t remember planting or even seeing before! The mystery tulip is very dark purple, almost black. A perfect match for the Geranium phaeum I intended to use anyway, as it is taking over one spot in my garden. I love the decorative foliage on this G. phaeum, which reflects the chocolatey purple of the flowers.

I also wanted to use the seedheads of my red Pulsatilla vulgaris. Another favourite, and the colours matched too. So in it went, along with a few purple Heuchera leaves and a fading deep red Hellebore. 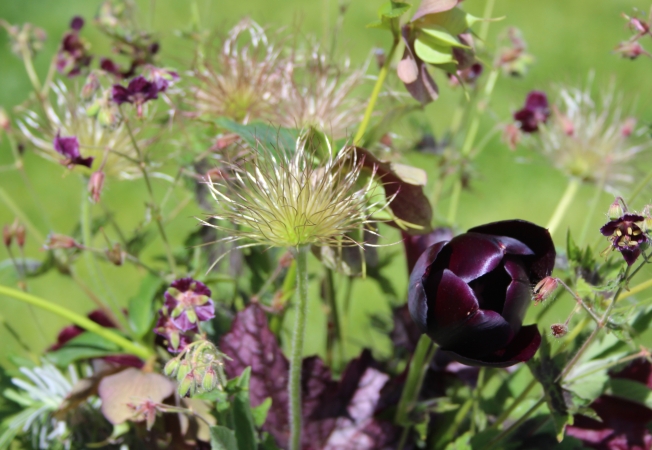 And since I had decided on a purple glass vase, a few cuttings of sage and lavender around the edges lightened it up a bit. 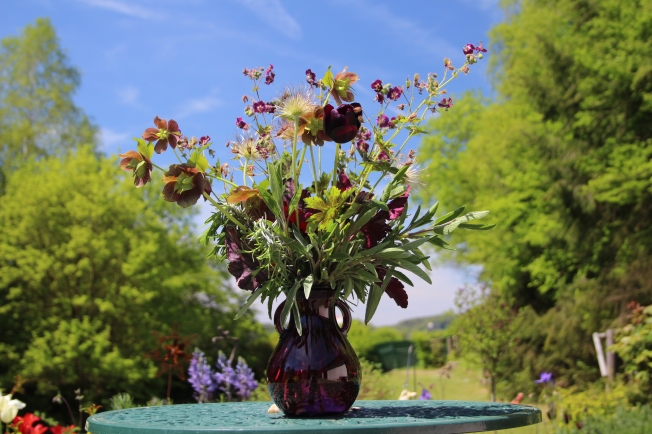 I hope you are all getting some of this beautiful blue sky too. 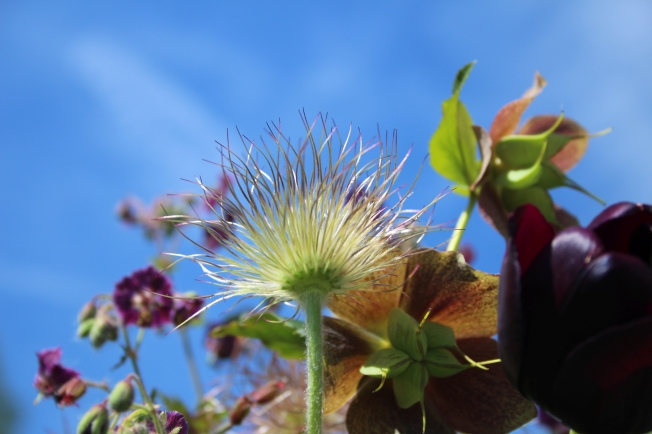 Have a week filled with sunshine!

What a beautiful sunny day today, and it was really warm too. Lots of jobs needed doing, so my vase for Cathy’s meme didn’t get too much attention this week. Nonetheless the flowers I chose gave me a big hug when I put them in a vase full of cool water. 🙂 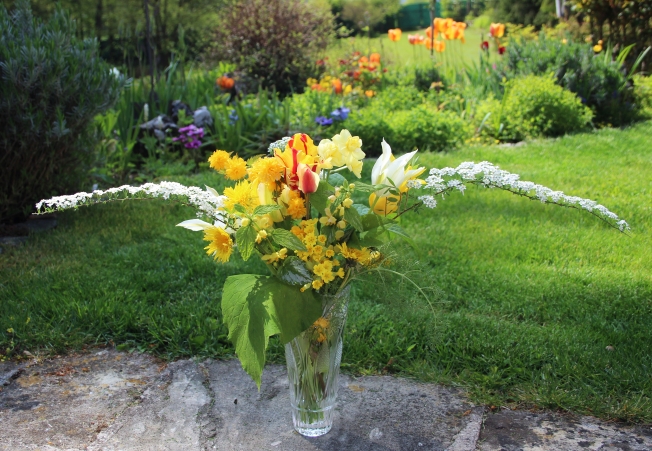 The white arms outstretched are the sweet smelling Spirea (unidentified as yet). I also included several different tulips, including a flashy new parrot tulip that opened this week, helpfully labelled “Parrot Tulip”. Then some Cowslips and Dandelions, Lamium and Kerria japonica. There’s a big Hellebore leaf in there along with a couple of the large Trachystemon orientalis leaves and a whisp of Fennel. 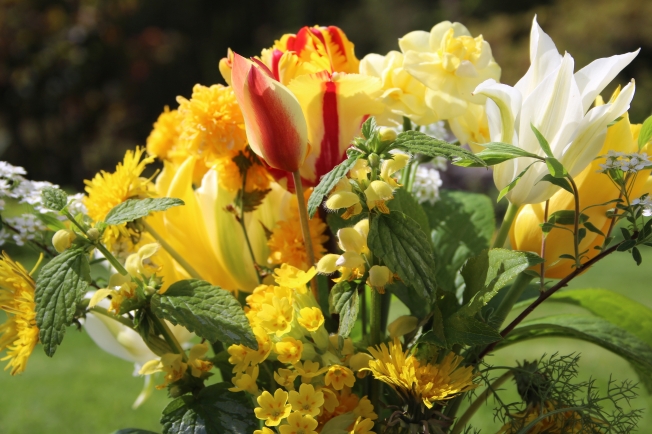 Oh, and a new Narcissus which I think is called “Cheerfulness”.

Here’s a big hug from my Spirea for you all. (See that blue sky?)!

Have a sunny week! 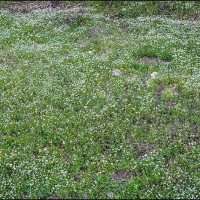 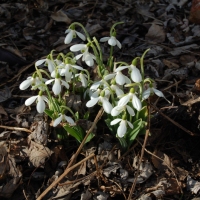 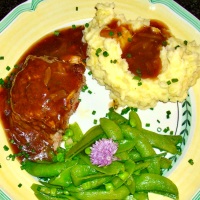 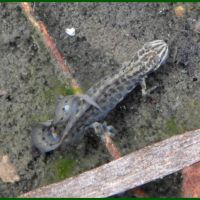 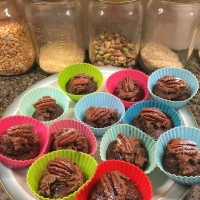