With nasty germs being top news at the moment, I thought I would share this lovely poem that my Mum received from fellow gardeners last year. (For serious gardeners only! LOL!) 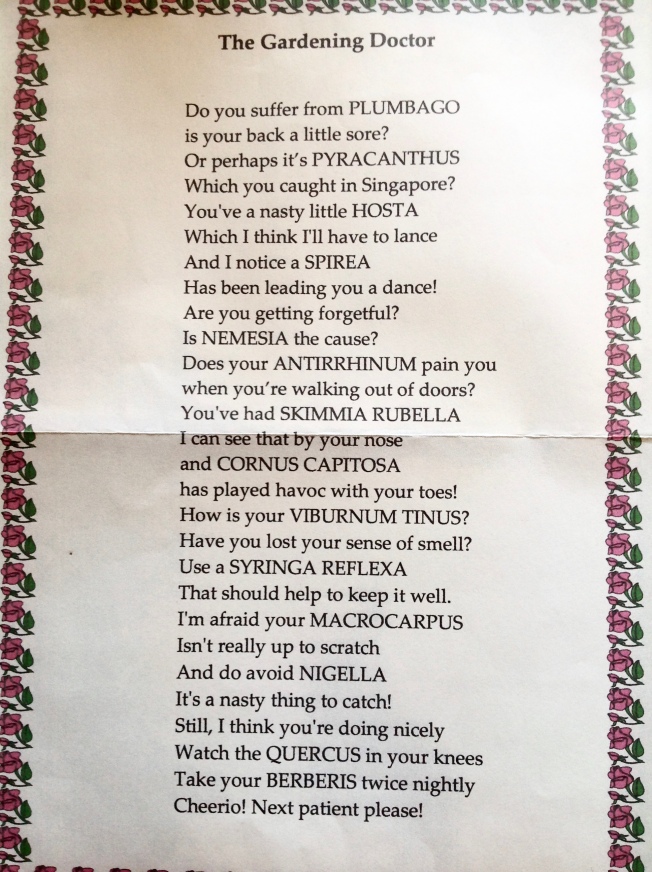 Wishing you all good heath and happy gardening!

To mark this short day I found a lovely, if somewhat sober sonnet by Edmond Holmes, from ‘The Triumph of Love’ collection, which I would like to share with you.

Like as the thrush in winter, when the skies
Are drear and dark, and all the woods are bare,
Sings undismayed, till from his melodies
Odours of Spring float the frozen air, –
So in my heart when sorrow’s icy breath
Is bleak and bitter and its frost is strong,
Leaps up, defiant of despair and death,
A sunlit fountain of triumphant song.
Sing on, sweet singer, till the violets come
And south winds blow; sing on, prophetic bird!
Oh if my lips, which are for ever dumb,
Could sing to men what my sad heart has heard,
Life’s darkest hour with songs of joy would ring;
Life’s blackest frost would blossom into Spring. 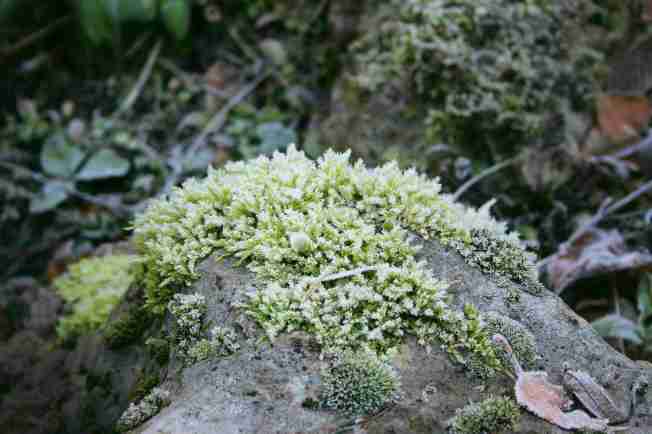 The winter solstice occurred here in Germany at 5.48am this morning. I was not up to experience the moment, although I doubt very much if anything would have marked the moment anyway. Since it is, quite simply, just a moment – albeit a moment many of us have been waiting for – and it is over in a tick and leaves that little itch of a thought behind… Yes, the days will not become noticeably longer for a couple of weeks yet, but they ARE getting longer. And do you sense that tinge of excitement at the thought of snowdrops, daffodils and tulips popping up in the garden to greet the spring?

We haven’t had winter yet though, so I mustn’t count my chickens…

I had in fact been looking forward to a snowy winter, but now I think I may be happier to forego snow and ice and skip straight ahead to the March winds and April showers! I have been reading how the winter appears to be just as mild in most of the US and UK too. And John at A Walk in the Garden in North Carolina has already spotted some daffodils in flower! Have you seen any daffodils yet?

Whatever the weather, I wish you all a very happy and harmonious Christmas, full of all the things you wished for. And I look forward to seeing you in the New Year to share another year of my garden and kitchen with you and to be delighted by all your wonderful posts too.

This year I am joining Lucy at Loose and Leafy in following a tree, and I am posting monthly about my Field Maple (Acer campestre) which stands at the bottom of our garden. 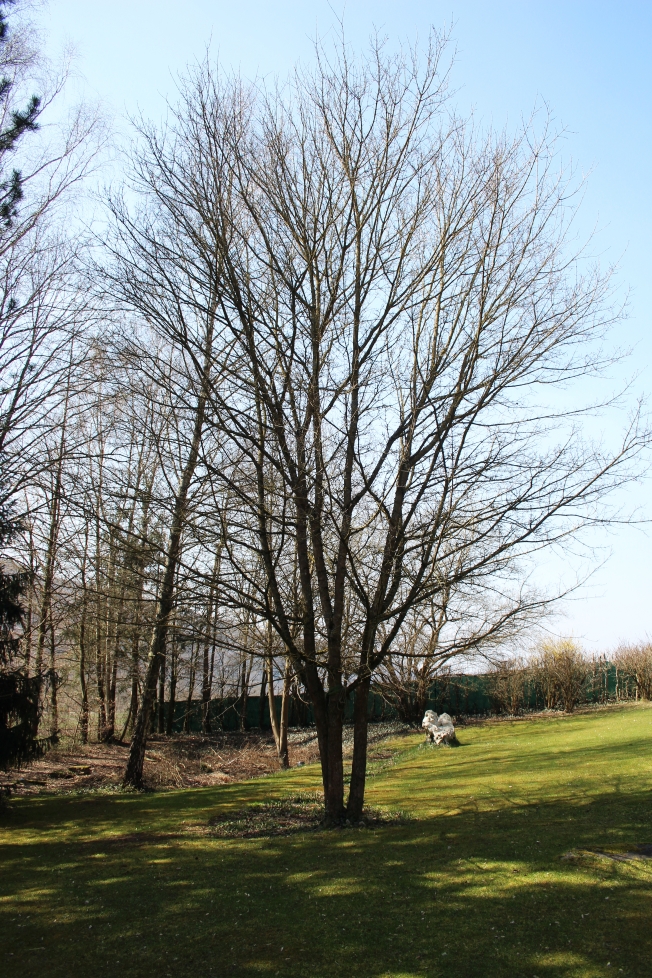 Look up, look up, at any tree!

There is so much for eyes to see:

Twigs, catkins, blossoms; and the blue

Of sky, most lovely, peeping through…

(from “Look Up!” by Cicely Mary Barker)

Despite some really warm days the leaf buds are only just showing signs of development. I can’t wait to see the leaves unfurl.

The other members of the Acer family in my garden are just as far on or even a little further ahead; the Acer pseudoplatanus (Sycamore)…

and the Acer palmatum (Japanese Maple)… 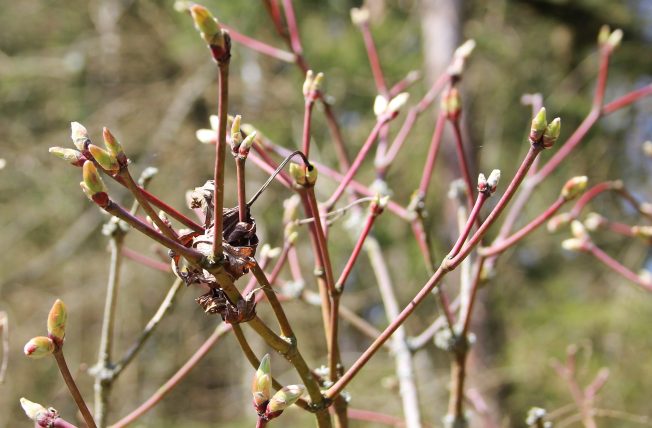 Between the 7th and 14th of each month you can link in with your tree at Loose and Leafy. Dozens of people from all over are taking part, so why not join in!

Are you seeing any leaf growth yet?

Selected, Edited and with an Introduction by Sarah Maguire 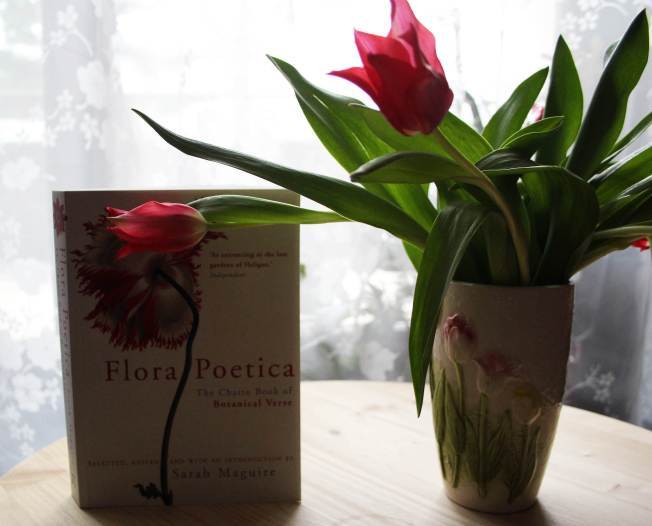 Recently this book featured as a prop in my “In a Vase on Monday” post, and I realized I had not reviewed it although I have had it for several years now. 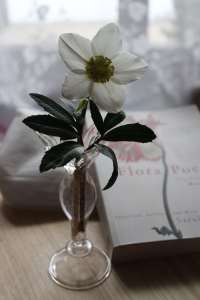 This collection of poetry is the second favourite in my book shelf (my first favourite is the New Dragon Book of Verse which I learned to love in my school days!), and it often gets an airing, not just in winter.

The poems are all about plants, and they are (in my opinion!) all wonderful… in very different ways. Perhaps I haven’t read every single one, but there are many I have read over and over again. One seasonal example is Louise Glück’s “Snowdrops”, which I find very moving. Here’s an excerpt…

“… I did not expect to survive,
earth suppressing me. I didn’t expect
to waken again, to feel
in damp earth my body
able to respond again, remembering
after so long how to open again
in the cold light
of earliest spring–“ 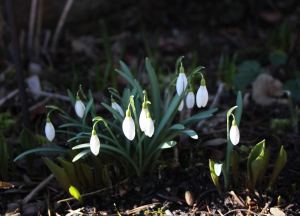 The book is divided rather unusually into botanical families, which means that I have learnt a few things while thumbing through it. Did you know, for example, that forget-me-nots are in the same family as borage? I suppose some of you did, as you are all so knowledgeable, but I had never given it much thought! We are taken through over 50 different botanical families such as the  Maple and the Beech, the Onion, Arum, Lily, Beech, Spurge and Olive, and many of the poems have a note on the botanical name of the plant, tree or flower that is the subject. The sections vary in length; families like the Vine have only one, while the Rose section has over 40. One of my favourites in the Rose section is Dorothy Parker’s “One Perfect Rose”, and here are the first and last verses…

A single flow’r he sent me, since we met.
All tenderly his messenger he chose;
Deep-hearted, pure, with scented dew still wet –
One perfect rose….

… Why is it no one ever sent me yet
One perfect limousine, do you suppose?
Ah no, it’s always just my luck to get
One perfect rose.

Another surprising element of this anthology is to read one poem from, say, the 17th century and then the next one is from the 20th century. For example, Robert Herrick’s poem “To Daffadills”  is followed by Sylvia Plath’s “Among the Narcissi”. Then the first line of the 1998 James Reiss poem “Lily” reads “Went out & scissored a lily…” and on the opposite page we read “White though ye be; yet, Lillies, know…” in Robert Herrick’s “How Lillies Came White” from 1648. These juxtapositions are fascinating, unexpected and work very well. 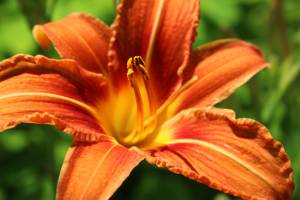 It is also fascinating to see the way certain plants, such as the rose, have captured the romantic imagination over centuries. Symbols and human desires have changed very little over time, even though the countryside in which they grow has altered dramatically. John Clare‘s idyllic images of rural England in the early 19th century demonstrate this time and again with his references to meadows, wheatfields and cattle grazing. There are quite a few of his poems here; with his eye for detail and his passion for the countryside he tended to focus frequently on individual plants.

And then having Sylvia Plath next to Ted Hughes, or John Clare (“The Wheat Ripening”) next to Vikram Seth (“Evening Wheat”) is, quite simply, very enjoyable reading. 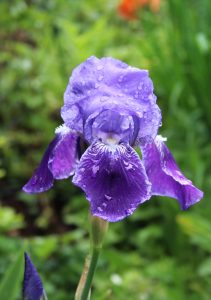 There are many writers in here I did not know before, from all over the globe, and I have been encouraged to look for more of their work. But then there are also the lovely old English familiars; Thomas Hardy, John Donne, W.B.Yeats, William Wordsworth, D.H. Lawrence, etc.

The book has an index of the poems under the botanical families, as well as an index of poets, one of titles AND one of first lines. There is also a nice introduction by Sarah Maguire, a poet herself, who composed this anthology. She describes how and why she gathered so many poems on flora and gives a few details of what she was unable to include, as well.

If you love plants, botany and poetry you will most definitely like this book!

A final note: the name “Chatto” in the title refers to the publishers Chatto and Windus, an imprint of Random House. I thought there must be a connection to Beth Chatto so looked this up and found out that the founder of this publishing house in 1873 was actually Beth Chatto’s father-in- law. Curiosity satisfied!

Catkin: a slim, cylindrical flower cluster, with inconspicuous or no petals, usually wind-pollinated…

The contents of my vase for this week’s meme “In a Vase on Monday” – where Cathy challenges us to bring garden materials indoors each week – are completely recycled;  February is still cold and snowy and everything in the garden seems to be hanging in icy equilibrium.

But the Forsythia and catkins brought in from the cold last week are opening and remind me that spring will soon be here.

The green shoots are on a twig of spindle tree, which was in last week’s vase for the seedheads. And a piece of Miscanthus from last week also fitted into my tiny green vase. 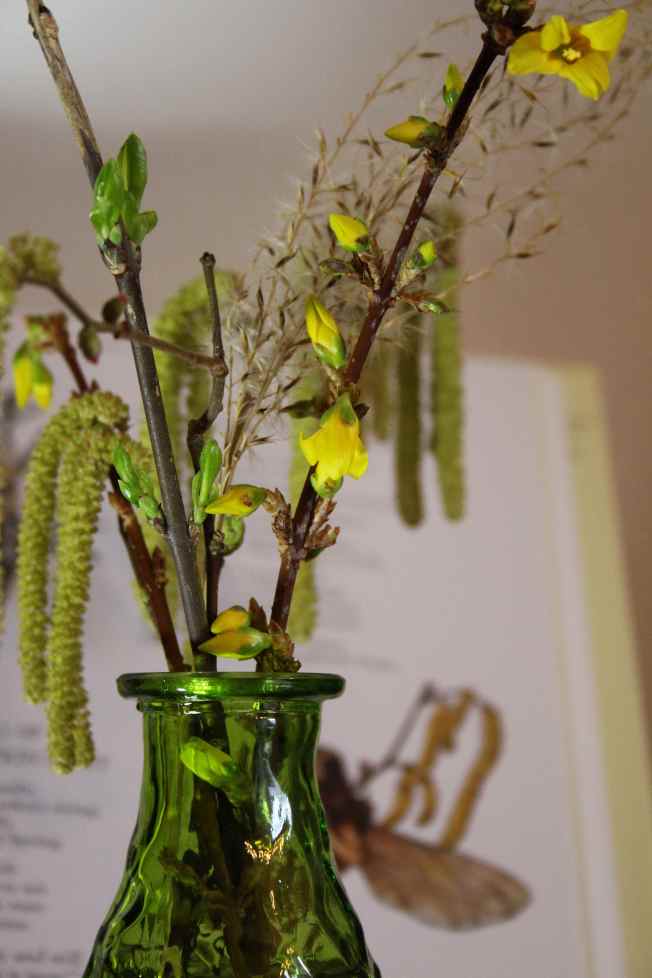 The Flower Fairy poetry book in the background is open on the Hazel Catkin page:

I love that last verse!

While yet the woods lie grey and still
I give my tidings: “Spring is near!”
One day the land shall leap to life
With fairies calling: “Spring is HERE!” 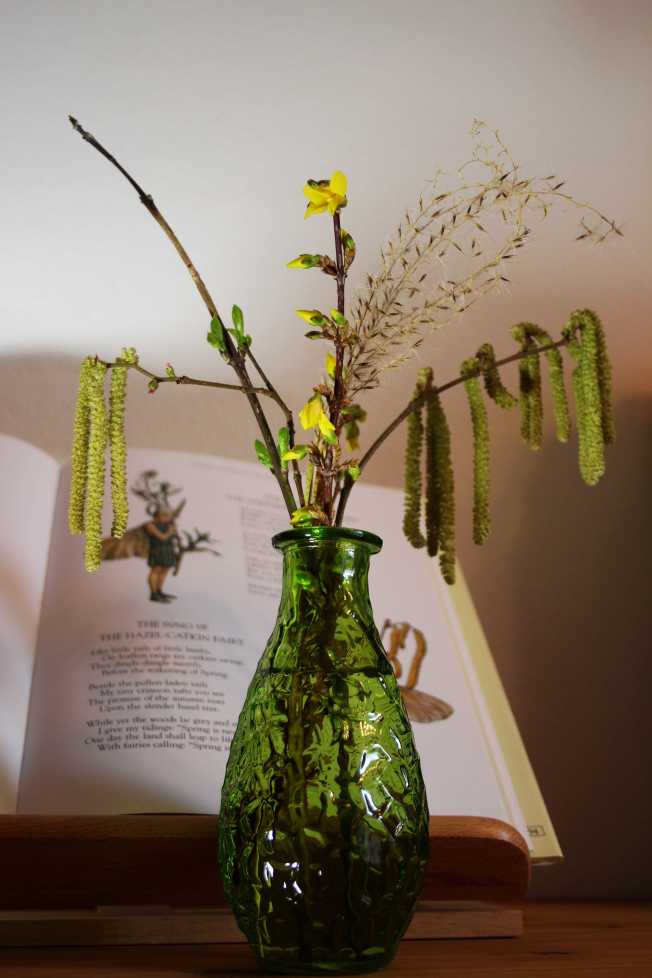 Do visit our host, Cathy at Rambling in the Garden, to see her vase and all the others linked in from around the world.

Maybe you can join in too? 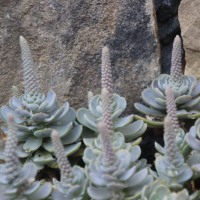 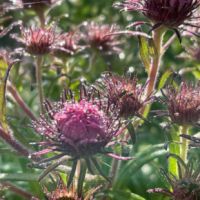 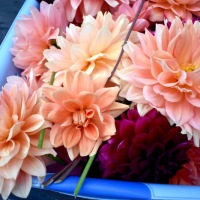 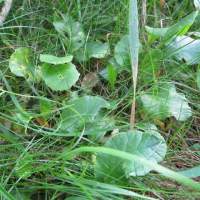 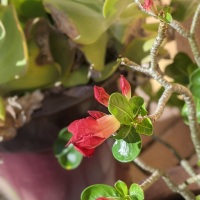